Kalita Records are proud and honoured to announce the first ever and definitive discography of Carrie Cleveland. Here, we offer an expanded LP of her 1978 album ‘Looking Up’, including extra songs from both her issue and promotional versions of her single ‘Make Love To Me’, plus a 7″ featuring the previously unknown sweet soul single ‘I’ve Got A Feeling’. Housed in a gatefold sleeve and accompanied by extensive interview-based liner notes and never-before seen photos. 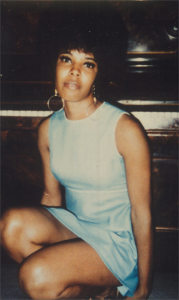 As well as being a probation officer during the day, Bill was a multi-disciplined musician, performing mostly on keyboard but also able to play the drums and arranging all of his compositions. He had started a local band, The Creative Set, before meeting Carrie, and she joined as the singer, which allowed them to use it as an avenue through which to showcase both of their musical talents. As she fondly remembers, Bill “always wanted to have a band and he liked the way that I sang so we started the group”. Sometimes it was just the two of them, and at other times they would invite other musicians such as Victor Green or local drummers or bass players to join them on stage. They toured the Oakland Bay and San Fransisco areas, “playing at all the local clubs” and small venues in the vicinity, such as Bancroft Street Lounge, Ruthie’s Inn and Pasand Lounge in Berkeley, and The Claremont Hotel in Beverley Hills. Carrie recalls that at the time they would mostly perform cover songs by contemporary soul and R&B artists such as Carla Thomas, BB King and Bobby ‘Blue’ Bland. A setlist that Carrie has been able to locate shows how in 1981 they were performing both their original compositions such as ‘Love Will Set You Free’ and ‘Take A Moment’ with other popular songs such as Earth, Wind & Fire’s ‘Let’s Groove’, Stephanie Mills’ ‘Never Knew Love Like This Before’ and Luther Vandross’ ‘Never Too Much’. However, performing in front of an audience did not come naturally to Carrie at first. Indeed, she recalls that “during my first show I was so nervous my knees were knocking as I was singing and I heard someone in the audience say she can sing but look at her legs shake”. This anxiety continued throughout her musical career, and as she candidly notes, “I never got over from being nervous. I just got used to it.” Nevertheless, the group was received positively, so much so that at one point they had even intended to tour internationally to Japan, but “at the time I had my son Heston and I didn’t want to leave him in the care of someone else”. Instead, they “decided to stay in the States and… ended up making the album”. 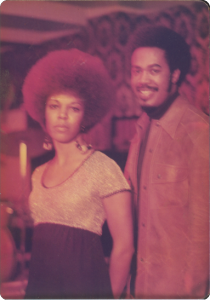 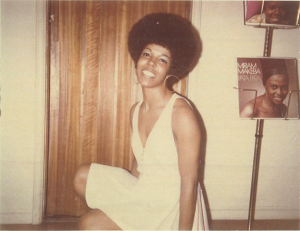 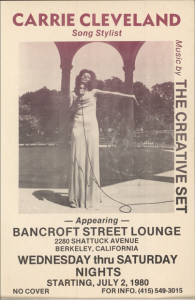