Kalita Records are extremely excited to repress once again their second release, Okyerema Asante’s Ghanaian disco monster, ‘Sabi (Get Down)’.

After touring the world and recording with both Hugh Masekela and Oneness of Juju, ‘Sabi (Get Down)’ was Okyerema’s first solo record, released privately in limited numbers on his label Atumpan Records in 1980/1. Recorded and manufactured in the USA, but only ever released on the African continent, this self-funded, scarce, and brilliant afro-disco LP regularly exchanges hands for eye-watering prices. 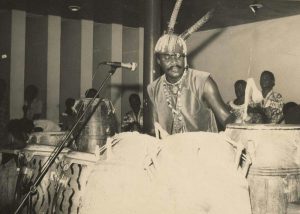 This is the first time that ‘Sabi (Get Down)’ has ever been officially reissued, and we are happy to reproduce it in its original, 14 minute long form (check out Lady Eke Ete’s amazing vocals at the 13 minute mark!), backed by the equally impressive ‘That’s My Girl’ on the B side. In addition, we are glad to accompany it with extensive interview-based liner notes and never-before-seen photos, detailing Okyerema’s career from his membership of Ghana’s legendary band Hedzolleh to performing with Paul Simon and Fleetwood Mac twenty years later.

We hope that you love both tracks as much as we do, and invite you to join us in celebrating the musical world of Okyerema Asante!

Check out www.kalitarecords.co.uk closer to the release date for a video interview with Okyerema, and for extra photos!